You are here: Home / Motivation / 18 Insightful TED Talks On Money You Need to Watch

In that case, you’re probably already familiar with TED Talks, a collection of short messages on “ideas worth spreading.” Talks are given annually at the primary TED conference in Vancouver, British Columbia, as well as hundreds of independently-organized events under the TEDx brand.

TED Talks cover a variety of topics from technology to science to psychology and, you guessed it… money!

Here are 18 TED Talks on money will teach you financial principles through storytelling, introduce you to new perspectives, and challenge your way of thinking.

If you don’t want to scroll down this page to find the talk that most interests you, here’s an index of the videos you’ll find featured in this post:

Could Your Language Affect Your Ability to Save Money?

“What can economists learn from linguists? Behavioral economist Keith Chen introduces a fascinating pattern from his research: that languages without a concept for the future — “It rain tomorrow,” instead of “It will rain tomorrow” — correlate strongly with high savings rates.”

Does Money Make You Mean?

“It’s amazing what a rigged game of Monopoly can reveal. In this entertaining but sobering talk, social psychologist Paul Piff shares his research into how people behave when they feel wealthy. (Hint: badly.) But while the problem of inequality is a complex and daunting challenge, there’s good news too.”

How to Buy Happiness

“Michael Norton shares fascinating research on how money can indeed buy happiness — when you don’t spend it on yourself. Listen for surprising data on the many ways pro-social spending can benefit you, your work, and (of course) other people.”

How We’ll Earn Money in a Future without Jobs

“Machines that can think, learn and adapt are coming — and that could mean that we humans will end up with significant unemployment. What should we do about it? In a straightforward talk about a controversial idea, futurist Martin Ford makes the case for separating income from traditional work and instituting a universal basic income.”

Know Your Worth, and Then Ask for It

“Your boss probably isn’t paying you what you’re worth — instead, they’re paying you what they think you’re worth. Take the time to learn how to shape their thinking. Pricing consultant Casey Brown shares helpful stories and learnings that can help you better communicate your value and get paid for your excellence.”

(In other words: Time to get a raise at work!)

My No Spend Year

“Michelle McGagh is no stranger to writing about the merits of saving. But how much did she really know about her own spending? Last year, she set herself the challenge of only spending money on essentials for a year. Her challenge to stop “squandering” money became a book called The No-Spend Year and saved her £22,000. Learn the reasons why Michelle did it, what she learned about herself, consumerism and why we spend.”

My Year of Living without Money

“Carolien Hoogland is an Action Researcher, meaning she co-operates with communities to facilitate problem-solving of these communities. In 2008 she joined the Dutch Research Institute for Transitions (DRIFT) at the Erasmus University. Inspired by the people and way of thinking at the institute, Carolien embarked on a personal experiment: in 2010 she lived outside the monetary system, gaining food and other needs through bartering. The year turned out very fruitful with many serendipical lessons about her life and work, our economy, and societal dynamics.”

One Life-Changing Class You Never Took

“Alexa von Tobel is the founder and CEO of LearnVest.com which she has been developing and growing since 2006. LearnVest is the leading personal finance and lifestyle website that brings financial literacy to women.”

“What do you think of people in poverty? Maybe what Jessica Jackley once did: “they” need “our” help, in the form of a few coins in a jar. The co-founder of Kiva.org talks about how her attitude changed — and how her work with microloans has brought new power to people who live on a few dollars a day.”

Sell Your Crap. Pay Your Debt. Do What You Love.

“In 2008, after the birth of his first child, Baker and his wife decided to sell everything they owned, pay off their consumer debt, and spend a year traveling abroad as a family. They began sharing their journey in early 2009 on the blog Man vs. Debt, now 15000 subscribers strong. In sharing their ups and downs in the areas of personal finance, consumerism, clutter, travel, minimalism, and passionate entrepreneurship, they realized they aren’t alone in a desire to explore and grow.”

“It’s easy to imagine saving money next week, but how about right now? Generally, we want to spend it. Economist Shlomo Benartzi says this is one of the biggest obstacles to saving enough for retirement and asks: How do we turn this behavioral challenge into a behavioral solution?”

“For the first time in history, the majority of American parents don’t think their kids will be better off than they were. This shouldn’t be a cause for alarm, says journalist Courtney Martin. Rather, it’s an opportunity to define a new approach to work and family that emphasizes community and creativity.  The biggest danger is not failing to achieve the American Dream,” she says in a talk that will resonate far beyond the US. “The biggest danger is achieving a dream that you don’t actually believe in.”

What You Weren’t Taught about Making Money

“What if making money was just like riding a bike? Where you get better the more you practice the skill. While you may be familiar with money preserving skills like ‘save more’ or ‘spend less’, Sarah Potter explores the myths and realities of what it is really like to build the skills to make more money, grow wealth and investing in the markets for average people.  Find out why financial literacy is failing you, and how to change the financial narrative for the next generation.”

“Adam Carroll talks about his $10,000 Monopoly game with his kids and how to teach financial management in a cashless society. Adam’s core message is we are all after the same thing – to relentlessly pursue our passions, live simply and happily, and make a difference to those around us.”

Where in the World Is It Easiest to Get Rich?

“In which society is it easiest to get rich? Contrary to common belief, it is not countries like the US or the UK that create the highest number of rich people per capita, but Nordic social democracies like Norway and Sweden. Counter-intuitive as it may sound, high taxes, generous welfare states and strong unions makes a better environment for the people who want to earn huge amounts of money, than free markets, low taxes, and minimal government intervention.”

“In 1993, Bill and Melinda Gates—then engaged—took a walk on a beach in Zanzibar, and made a bold decision on how they would make sure that their wealth from Microsoft went back into society. In a conversation with Chris Anderson, the couple talks about their work at the Bill & Melinda Gates Foundation, as well as about their marriage, their children, their failures and the satisfaction of giving most of their wealth away.”

“Millennials will soon make up 60% of the workforce causing a major disruption in how Americans work and live. Companies must adapt to meet their needs. The solution is for the workforce to do something unexpected.”

Why You Should Know How Much Your Coworkers Get Paid

“How much do you get paid? How does it compare to the people you work with? You should know, and so should they, says management researcher David Burkus. In this talk, Burkus questions our cultural assumptions around keeping salaries secret and makes a compelling case for why sharing them could benefit employees, organizations, and society.”

TED Talks On Money: Your Favorite? 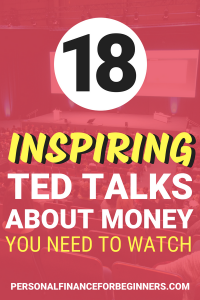 Which one of the financial TED Talks was your favorite?

(It’s okay if you didn’t watch them all. Just make a note to come back and watch the rest when you’re bored this weekend! It’s also a great way to explore your financial values.)

My personal favorite was “Why I Retired at 32.”

While early retirement isn’t in the cards for everyone, perhaps we can all find ways to take an occasional mini-retirement, sabbatical, or extended vacation to give ourselves a chance to experience new things, renew our relationships, or reset our perspectives.

Want to come back and finish these videos later? Or do you know a family member or friend who might benefit from this inspirational and thought-provoking content? Why not Pin it?